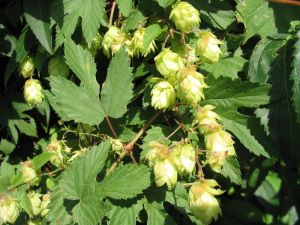 Fun plants are fun. For example, Humulus lupulus, also known as hops, is an extremely interesting plant. The female flowering structure (a ‘cone’, or technically, a catkin) is used in the production of beer as a predominant flavoring agent (though you wouldn’t know it from tasting industrial lagers).  The hop genus is also relatively unique – there’s just a few wild species (though many cultivars). Its closest relative is another plant you might recognize: Cannabis. In fact, until a few years ago, Cannabis and Humulus were the only genera in the family Cannabaceae. That tidbit of knowledge is one of a botanist’s most riveting party conversation starters.

But phylogenetic studies in the early 2000s used chloroplast matK and other sequence data to nestle our two party plants within the hackberry family. Perhaps they have had the last laugh. Taxonomic naming conventions state that the oldest named family takes precedence. The hackberries are now in the Cannabis family.

1 thought on “Phylogeny of fun: a botanist’s best party piece”