Westley: Rodents Of Unusual Size? I don’t think they exist. (The Princess Bride)

What happens when you introduce invasive burrow dwelling rodents to an island populated by burrow nesting birds?

Turns out it’s not so great for the birds. A recent study of Atlantic petrels (Pterodroma incerta) has documented the unexpectedly severe impact of the invasive house mouse (Mus musculus) on hatchling survival. The Atlantic petrel is listed as endangered by the International Union for Conservation of Nature, and is very likely now limited in range to a single island, Gough Island, in the South Atlantic Ocean. Previous populations on another island were extirpated (driven to local extinction) by the invasive black rat (Rattus rattus). Gough Island is free of rats, but population demographic models of the last population of Atlantic petrels shows a shrinking population size. So what’s causing it? Filming the nest burrows of Atlantic petrel and other ground nesting sea birds has revealed the culprit: 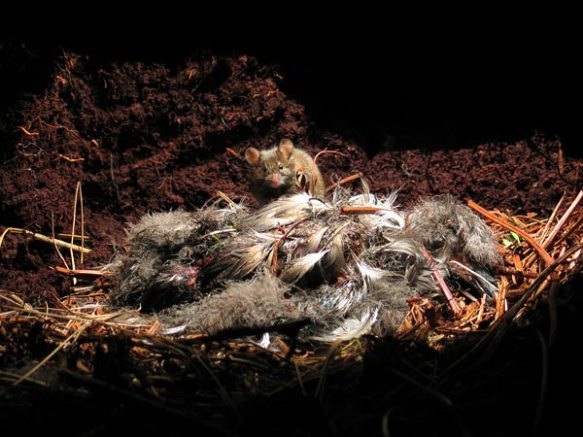 Invasive predators are often most devastating in an island context. Because islands are limited in space and resource availability, island fauna often evolve without major predation pressure. When a predator from the mainland invades, the island species don’t know how to defend themselves, and they have nowhere to run. There may be up to 2 million mice on small Gough Island alone (only 65 km2), and when food becomes scarce in the winter, they turn to their conveniently burrowing seabird neighbors.

But we aren’t talking about your average house mouse, here. These mice are capable of eating very large seabirds; these petrel chicks weigh more than half a kilogram, and on the same island, mice also prey on albatross chicks weighing more than 10 kilograms. The mice on Gough Island reportedly reach up to half again as large as an average house mouse – up to 10 inches in length, including the tail. This may be an interesting example of an invasive animal demonstrating island gigantism. Generally, smaller mice are better able to avoid predators. But on Gough Island, there are no significant mouse predators, so there’s no advantage to being small. But there might be an advantage for larger size, if larger mice are better able to hunt large seabird chicks, and therefore better able to get a meal in the winter, and leave more progeny behind. Natural selection acts on invasive species, just like anything else, making them better adapted, and able to take advantage of, their novel habitats.