And you give me the visions.

During the dynasties of ancient Egypt through the European Middle Ages, people had to rely on their local neighborhood plants for their recreational, ritual, and homicidal psychoactive drug needs. They didn’t have access to those new-fangled plants from the Americas that the kids are so into these days. And so they turned to several plants from the Tomato family (Solanaceae), and the ‘fun’ alkaloids therein.  These include belladonna, mandrake, and the much less excitingly named henbane.

Black henbane (Hyoscyamus niger), native to the Mediterranean, contains a set of chemicals known as tropane alkaloids, which includes atropine, scopolamine, and hyoscyamine. In mammals, these alkaloids can slow smooth muscle action by inhibiting acetylcholine receptors in both the central and peripheral nervous systems. Small doses can effectively treat heart irregularities. Larger doses produce hallucinations, and slightly larger doses result in death, making it a popular choice among murderous poisoners, from ancient Egyptian to modern times. German brewers, before the total adoption of hops, were known to spike their gruit beers with black henbane, for that extra special something.The hallucinogenic properties, accompanied by the euphoric feeling of flying, were utilized in rituals of European “witches”, and the legend of  flying witches was born. As Simpson and Ogorzaly describe in this juicy tidbit, “the broom purportedly represents the stick used to apply atropine-impregnated ointments to vaginal membranes for absorption.” Makes you think about Quidditch in a different way, doesn’t it? 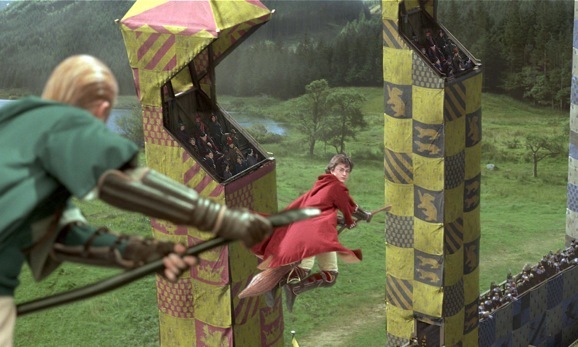 This seems… awkward now. From Harry Potter and the Chamber of Secrets.

So of course, when Europeans began their massive exchange of people and plants with the Americas, one of the first plants they brought with them was black henbane. You never know when you’re going to need to poison someone, after all. It can now be found throughout the United States and southern Canada, in pastures and on roadsides. Its exciting chemistry makes it poisonous to most grazers, though the putrid-smelling leaves give the game away, a bit. A single plant can produce as many as half a million seeds, though henbane only infrequently takes over large areas. Black henbane, now globally distributed, is another example of a plant we liked too much for the good of the ecosystems around us.

3 thoughts on “Henbane, you make my heart go thumpty, thumpty…”