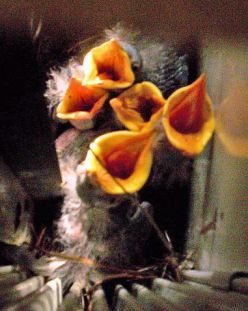 So many baby starlings! Photo from Wikimedia Commons by Eileen Coles.

It is the favorite past time of every invasion biologist since H. G. Baker in the 1960s to make lists of traits which distinguish invaders. We’ve been doing it for at least 50 years, and yet, no list ever seems to satisfy. There are always exceptions – a majority of cases seem to be exceptions, really. And maybe that’s because we need to think about it in more dimensions.

It has often been suggested that species with high reproductive rates – in other words, they have lots of babies in a relatively short period of time ( or r-selected) – will be more likely to succeed in invading a new habitat. Read a description of an invasive species, and one of the first things commented on will be how many babies a single individual can produce. The Evil Exotic Stink Plant can produce up to 7 million seeds in 10 minutes! Horror of horrors! But there are plenty of counter examples, of species with low reproductive rates (K-selected), which are invasive. So what’s going on? Answering this question is complicated by the fact that we typically have no information on ‘failed invasions’ – on all the species which are transported to a new environment, but which don’t manage to establish self-sustaining populations.

Except when we do have that type of data. A recent paper used a global database of terrestrial bird introductions containing information on 2760 introduction events, only 47% of which were successful. This is a sweet data-set! And when Sol and co-authors looked at this data-set, what they found was that the hypothesis that species that were successful at establishing new populations would be r-selected didn’t hold up. For one thing, the need to reproduce quickly to escape the looming threat of stochastic extinction doesn’t seem to be as important as we would think. Sol et al’s models suggest that if at least 300 individuals are introduced at a time, stochastic extinction isn’t much of a threat to the new population. And in this data-set, that apparently happens more than 20% of the time.

For another thing, popping out a bunch of babies isn’t exactly the safest thing an individual could do when it finds itself in a foreign locale. Depending on the circumstances, it may be a safer bet to spread out reproduction over a longer lifespan. Species which have a lot of babies all at once are really putting all their eggs in one basket (sorry for the pun), betting that quantity will ensure survival that year. That’s a big risk. But for species which can spread their reproduction out over several years, losing their offspring in any given year has less of an impact. In fact, Sol et al. found that, after they corrected for the number of individuals introduced at a time (propagule pressure), relatedness between the species, and brain size, the two extremes of this spectrum – of the value of current reproduction relative to the lifetime reproductive output of a species (here called “brood value”) – were the ultimate winners. Species which either reproduced several times a year with a short lifespan OR species which reproduced only once per year, but have a very long lifespan were the two groups most like to successfully establish a new population.

Holy regression tree, Batman! From Sol et al., 2012, Science: “Tree regression describing brood value as a function of the number of broods per year (gray dots) and maximum life span (in years, black dots). The graphs in the bottom show the median and percentiles of the brood value and invasion potential for each strategy (from S1 to S11). Differences in brood value between strategies are all significant at P < 0.05 except for the pairs S4-S7, S5-S10, and S9-S10. “

And so that is why we can’t just come up with a simple list of “traits of a successful invader”, much as invasion biologists would like to; because it’s context dependent, and because multiple life-history strategies can succeed. To me, this begs the question: We know that life-history traits can evolve – does this happen in invasions? Are species successful invaders because they can shift their reproduction strategies towards the two extremes of this relative reproduction value spectrum?

EDIT, Nov 29, 2012: I’m an evolutionary-ecologist. I just don’t understand what evolution means without ecology, and vice versa. So perhaps this post is too ecology-y for the NESCent Blog Contest. But I, at least, don’t think so. And so I’m crossing my fingers!

6 thoughts on “Life histories of success!”