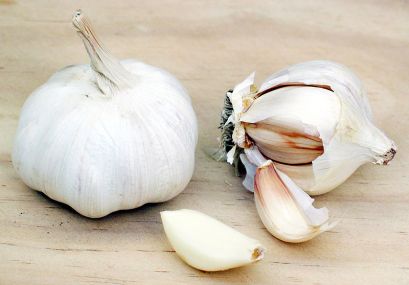 This garlicy edition of Students of Ethnobotany comes to us from the healthy Alison V.

Garlic has been used by humans for centuries, possibly best known in western culture as a deterrent to ward off attention from less than friendly vampires. It is also used extensively in cooking, where many people may be familiar with it. According to no-on but myself, its use in cooking probably arose as a covert way to detect whether the new next door neighbours are going to come suck your blood in your sleep.

Regardless of whether this is true or not, garlic goes well in a variety of dishes, and gives off a pleasant aroma and taste when cooked. Unfortunately the same cannot be said for your breath after you eat garlic. This “garlic breath” that many are so familiar with is caused by allyl methyl sulfide (AMS), which is absorbed into the blood during metabolism and from there travels to the lungs and mouth. There is a saying that drinking milk, as well as eating parsley have the ability to lessen this effect, though there are no scientific studies so the efficacy of this is still unproven.

Garlic also has various health benefits. When I got sick as a child, my mother would always make me do two things: drink ginger soup, and take a garlic shot. This garlic shot basically consists of a clove of raw garlic, diced into small pieces and poured in a cup with apple juice to make the taste bearable. Supposedly, it was to make me better – then again maybe my mother just thought I was a vampire. Who knows? Use of garlic as a medicinal herb dates back thousands of years though, and was prescribed by philosophers such as Hippocrates and Dioscorides for various sicknesses. Modern science seems to agree as well – in 1944, Chester J. Cavallito found that when cut or crushed, a compound in garlic is released called allicin that possesses antibacterial properties. This makes garlic useful in boosting the immune system and helping speed recovery from minor ailments. Cooking destroys these compounds however so in order to benefit from the medicinal properties of garlic it must be eaten raw.

In some Asian cultures, devout Buddhists also abstain from eating garlic as it is said to increase aggression and sexual desire in the body, and hinders meditation. Because many Buddhists follow a vegetarian diet, when asking for vegetarian food in Asia they will sometimes exclude garlic, but strangely (as I found out firsthand) not necessarily chicken.

Block, E. 2010. Garlic and other Alliums: the lore and the science. Royal society of chemistry.