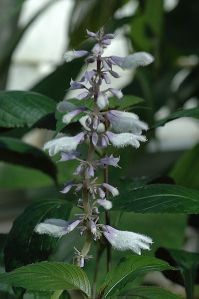 This divine edition of Students of Ethnobotany comes from the sage Riel Eden.

If you are a member of today’s younger generation, you probably have heard of Diviner’s Sage, more commonly known as Salvia divinorum. Although this plant is usually just referred to as Salvia, Salvia is the name of the entire genus of plants. The specific hallucinogenic plant is Salvia divinorum. I was interested in this plant because of the hype I heard around it when I was growing up. The common tag lines being ‘a plant related to marijuana, that is also legal’ or ‘an LSD that is legal.’ I wanted to investigate this plant and see if all those phrases were true.

Well, Salvia divinorum is not related to marijuana at all, it is actually part of the mint family and more specifically, a member of the sage genus (Murphy and Bola 2013). Salvia divinorum does cause hallucinations through the psychoactive ingredient, salvinorin A, and acts as a kappa-opioid agonist (Murphy and Bola 2013). Strangely, it has no actions on serotonin receptors, which is unlike most classic hallucinogens, like peyote and LSD. Also, compared to LSD, the potency of this compound is effective for hallucinations at around 200-500micro grams compared to LSD’s potency of 20 micrograms (Myers and Writer 2012). Along with hallucinations, this plant causes dysphoria, uncontrolled laughter, loss of body coordination and an overlap of visions with realities. So, where did this plant come from?

This plant’s native habitat is in a cloud forest (moist tropical forest with clouds situated low overhead) in the Sierra Mazateca of Oaxaca, Mexico. Here the plant is used spiritually by the Mazatec shamans, who  use it to facilitate visionary states of consciousness during spiritual healing, much like peyote. The Mazatec shamans believe that Salvia divinorum is an incarnation of the Virgin Mary, whom they hope to connect with through healing sessions with this plant (Meyer and Writer 2012). Salvia divinorum has also been used to treat diarrhea, anemia, headaches, rheumatism, and acts as a diuretic (Myers and Writer 2012).

Salvia divinorum’s legality now lies in a grey area; in some places it’s legal or its legality is being reconsidered. In other places, such as certain states in the US, the plant is now banned, although it is still being sold at tobacco stores and health food markets. So, I have debunked the myths on what this plant is and how it is in fact a hallucinogen. However, I’m still left with further investigating on the legal terms for this plant.