When times are hard, and supply lines are uncertain, you do what you can to conserve and extend what you have. Especially the small comforts of life, the really important things: the morning cup of coffee.  During the American Civil War, Southern soldiers and citizens alike never knew when the next shipment of coffee would make it up from the Caribbean. So they made do with what is now a regional favorite. The root of the chicory plant, now, as then, a common roadside weed, was collected, roasted, ground, and brewed along with coffee, to keep supplies lasting as long as possible. Chicory, while itself containing no 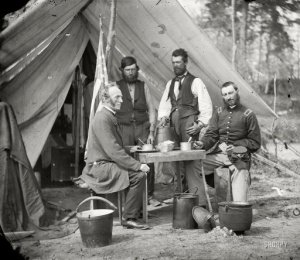 caffeine, adds a distinctive and, in my opinion, enjoyable, mellow taste to the typical brew.  This practice, of extending coffee with the addition of chicory, wasn’t new – it was done in France during the French Revolution as well. But people became so accustomed to the adulterated coffee that what was once done out of necessity, became adopted as a cultural hallmark of French descended peoples in North America (Acadians, Creoles, and Cajuns). It is now produced in the US on a large scale, and is easily available at your friendly internet coffee purveyor. What was once inflicted by the hardships of war, has become beloved. War leaves it’s stamp, even on the beverages we drink, and the plants we grow, hundreds of years later.

What’s all this then?

Couldn't hurt to check out my main points