It would be overly simplistic to think that all effects that an invasive species could have on an ecosystem were negative. In some ways, they can even appear… beneficial?

For example, when a new species comes into an ecosystem, diversity, by definition, increases. Species richness ticks upward, by one. If a lot of invasive species come in, then species richness goes up by a lot. Eventually, as the invasives push natives out of the system, richness will decrease, but this could take a while, if it happens at all.

Some invasive species provide nectar, or nesting space for native animals. Facilitation, or the species interaction which benefits at least one of the species and harms neither, is most often talked about as contributing to the invasibility of a community. In that case, a native species helps a non-native to get by in the new habitat, making it easier for the non-native to invade. But facilitation can work in the other direction too.

I once worked on an invasive salt cedar removal project at the Cibola National Wildlife Refuge in southwestern Arizona. While I was there, I noticed an interesting pattern. Salt cedar (Tamarix spp., Tamaricaceae) was introduced as an ornamental in the 1800s, and now dominates over 1 million acres in North America. It can have a devastating effect on the communities it invades by dramatically increasing the salt content of the top soil around it. The species is very salt tolerant, and deposits salt on the surface of its leaves to discourage herbivores. In the fall, when the salty leaves drop, a visible crust of salt can build up, until the ground looks white like snow, making it hard for most natives to grow. However, one species seemed (anecdotally) to be able to handle the increased salt levels. Arrowweed (Pluchea sericea, Asteraceae) may even benefit from Salt Cedar’s arrival; by knocking out the competition and even attracting pollinating bees, Salt Cedar could be facilitating the growth and even spread of arrowweed.

So in some cases, not every effect of an invasive species on an ecosystem is damaging. But despite this, their overall impact tends towards the devastating. It doesn’t all come out in the wash. 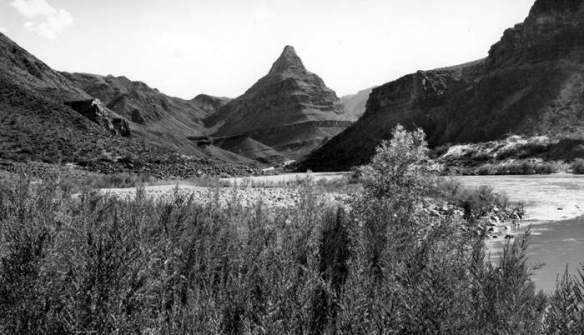 Grand Canyon National Park, Arizona. The camera station is now in a dense stand of arrowweed. Many saltcedar plants grow around the edge of the gravel bar where a half century earlier only one plant was visible. August 25, 1972. Figure 66-B, U.S. Geological Survey Professional paper 1132. - ID. Turner, R.M.