This edition of Students of Ethnobotany, by G. Loi, looks more deeply into the medicinal uses of our smelly friend, the ginkgo. 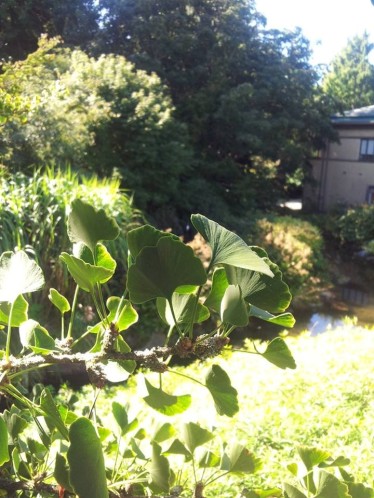 The ginkgo plant at the University of British Columbia. Picture taken in October 2013. Photo by G. Loi.

Which tree has no living relatives? Which tree was still standing after the Hiroshima atomic bomb in 1945? Which tree has awful smelling seeds that can enhance memory? The Ginkgo biloba, a plant native to China. My first experience with the ginkgo plant was when I was shelling the white seeds and picking out the fruit to make congee for my mother when she was sick. The slightly bitter and bland taste did not make much of an impression for me. It was not until much later, that I realized how the history and the uses of the ginkgo were so diverse and curious.

The ginkgo is rather like the Superman of trees. They have insect resistant wood and the bark is naturally resistant to disease. Their roots can be very deep which helps them anchor and be upright in windy and erratic weather. It also has aerial roots and sprouts. The leaves are tough and unattractive to pests. It lives in some of the most urban areas like Seoul, Tokyo, New York, and Vancouver. They do remarkably well in these areas and are rather resistant to the urban pollution, poor quality soils, and saline conditions and can thrive in wide ranges of soil pHs. These are perhaps additional reasons why ginkgos have managed to survive to this long without undergoing significant morphological changes.

In western medicine, the leaf extracts are most commonly used medicinally. Ginkgo leaves contain several pharmaceutical extracts: myricetin and quercetin. These extracts were found to reduce pancreatic cancer risk by 23% in an 8 year study at the University of Hawaii. The ginkgo also holds enough potential to be studied as a memory and concentration enhancer. In 2010, a group of subjects were given same amount of Ginkgo extract once a day and was considered to be significantly more effective than the placebo in the treatment in patients with dementia. In terms of attention enhancer, ginkgo extracts actually significantly improved the volunteer’s cognitive functions such as speed of attention, accuracy of attention, and quality of memory. Ginkgo extracts inhibit re-uptake of norepinephrine, the neurotransmitter, so it increases attention span. Ginkgolide B is also found to be useful for preventing myocardial ischemia because it blocks the platelet-activating factor, which is why it is used to treat circulatory problems in Chinese traditional medicines. In Asian cuisine, ginkgo seeds are used in many desserts.

So, the next time you have ginkgo congee, think about the 250 million of years the ginkgo had to survive through thick and thin to get there!

1 thought on “Students of Ethnobotany: There’s more to ginkgo than you think”